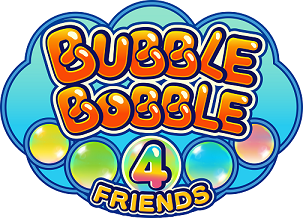 After more than 10 years, a sequel to the iconic video game classic will finally be released exclusively for Nintendo Switch via ININ Games and Strictly Limited Games.

After more than 10 years, Nintendo Switch players can look forward to a sequel of the cult 80’s game series Bubble Bobble by TAITO. The new Bubble Bobble 4 Friends was developed by the original studio TAITO Corporation and will include a brand new local 4-player mode. The sequel will be released both digitally and physically exclusively for Nintendo Switch in Europe on November 19, 2019, with the release in the USA to follow in the first quarter of 2020.

As in the previous highly popular series, the thrilling and epic bubble fight starts again!

One night, a child’s room became enfolded by a miraculous light and every object under its rays suddenly came to life – including the child’s most favourite toy, the little dragon called Bub. Full of jealousy, the wicked magician Baron von Blubba challenges the friendly dragon to battle.

In the ’80s and ’90s, the players jumped through the levels either solo or in the two-player mode. In the new part of the popular Bubble Bobble series, a 4-player cooperative mode is integrated, providing even more fun with friends.

“Bubble Bobble is an extremely popular title in Europe, so we decided to implement a pre-sale in Europe in conjunction with ININ Games and Strictly Limited Games. It is also the first internally developed title since Taito has re-entered the consumer market, and the development team is thrilled to be working on this famous IP. I deeply hope that many people will enjoy it” says Hiroshi Uemura, Executive Officer, Division Manager of Development, TAITO CORPORATION.

Collectors can look forward to the Collector’s Edition of Bubble Bobble 4 Friends, distributed exclusively by Strictly Limited Games. The ININ publishing label markets the retail versions and digital releases on the Nintendo eShop.

ININ Games, the new publishing label of United Games GmbH, focuses on the classic digital and physical marketing of high-quality retro, indie and arcade titles. Along with undisputed classics, numerous other milestones of gaming culture are in planning and will be announced in the coming months. For more information about ININ, visit http://www.inin.games/

TAITO Corporation (TAITO) is a wholly-owned subsidiary of Square Enix Holdings Co., Ltd. With headquarters in Tokyo, Japan, TAITO operates core businesses such as game arcade operations, coin-operated game machines, and mobile phone content services. A seminal part of gaming history, TAITO caused a worldwide sensation with its arcade legend, SPACE INVADERS®, and developed such fan favourites as PUZZLE BOBBLE® (BUST-A-MOVE®) and ARKANOID®. Today, TAITO continues to thrill game lovers of all generations by offering both classic and new family-oriented titles on the latest gaming platforms. TAITO delivers a wide range of entertainment experiences with the goal of providing consumers with fresh surprises and new discoveries. More information on TAITO can be found on the Internet at http://www.taito.com