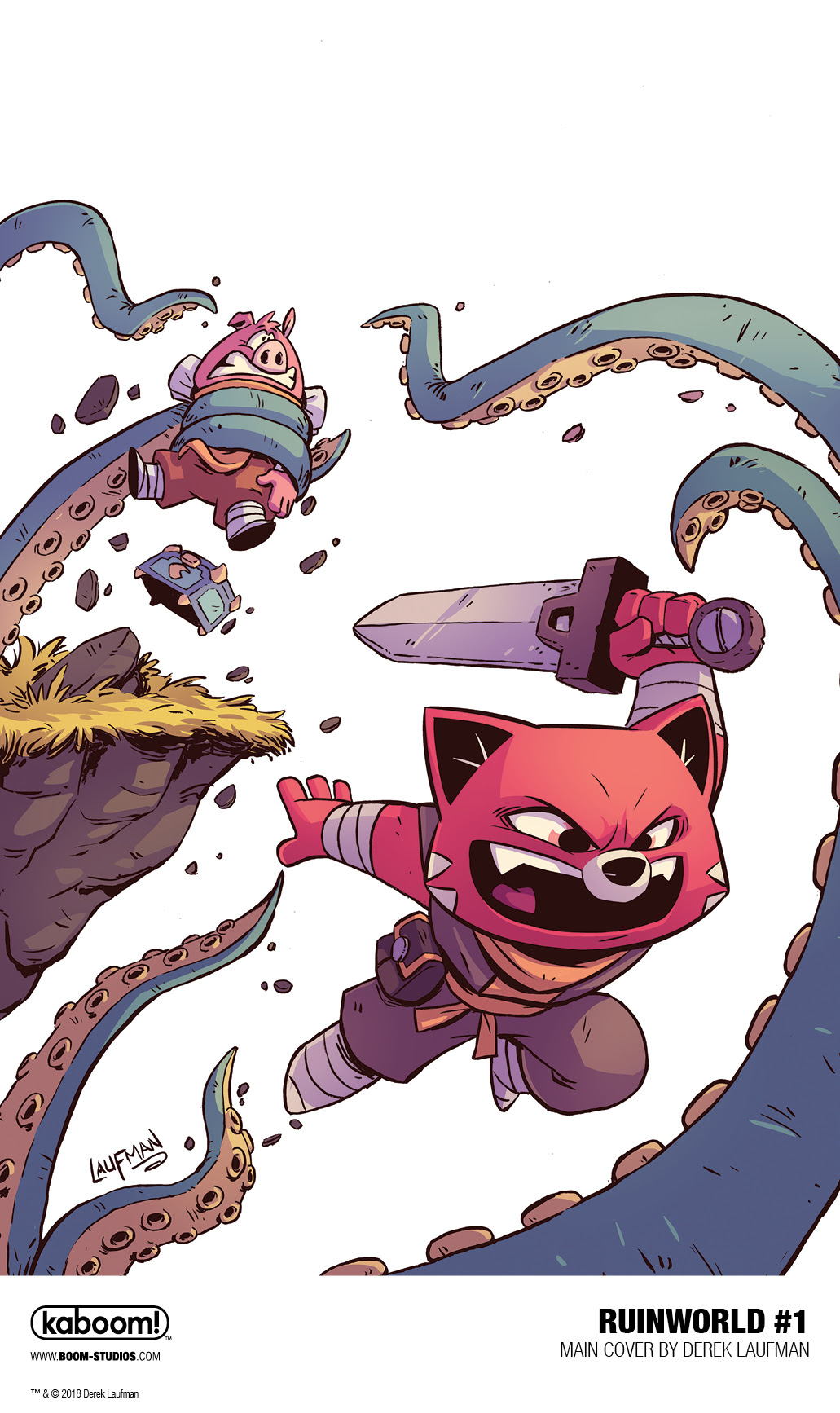 Discover Fun, Friendship & Screaming in The Face of Danger in July 2018 LOS ANGELES, CA (March 26, 2018) –  BOOM! Studios is proud to announceRUINWORLD #1, the debut issue of writer/artist Derek Laufman’s worldwide hit all-ages comics series at BOOM! Studios. Intrepid adventurers Pogo and Rex are on a quest for fame and fortune. Their discovery of a special map leads them on an epic journey through dangers, demons and old enemies. There’s one tiny problem—they’ve already lost the map. Now they’ll have to survive the greatest dangers of a world where threats hide behind every corner…if they can find a way to first survive each other’s best intentions first!

“In my new series RUINWORLD, readers can expect a fun and at times silly adventure, built around a fantasy world rich with history and lore,” said Derek Laufman. “RUINWORLD was created out of my love of fantasy worlds. Growing up with The Secret of Nihm, The Dark Crystal and The Neverending Story, my obsession with these rich fantasy worlds started as a child and continues to this day. When I set out to write a story I wanted to try and create a world that was full of magic and wonder like the stories I loved in my youth. When you build your own world the possibilities for story and character seem endless and that really excites me as a creator. I’m thrilled to be a part of the BOOM! Studios family and I look forward to working with them to bring RUINWORLD into the hands of readers around the world. ”

RUINWORLD is the latest release from BOOM! Studios’ critically acclaimed KaBOOM! imprint, publisher of world-class licensed series such as Adventure Time, Steven Universe, Over the Garden Wall, Peanuts, and Rugrats along with original series like Brave Chef Brianna by Sam Sykes and Selina Espiritu and The Deep by Tom Taylor and James Brouwer.

“RUINWORLD is a comic that is filled to the brim with action and with enough comedy to make any comic fan laugh out loud.” Whitney Leopard, Editor, BOOM! Studios. “Derek’s created a vibrant, rich world that turns the classic hero’s journey on its head in the most surprising – and cutest – ways you can imagine. I’m thrilled to have this story in KaBOOM! and look forward to sharing it with our readers of all-ages.”

Print copies of RUINWORLD #1 will be available for sale in July 2018 at local comic book shops (use comicshoplocator.com to find the nearest one) or at the BOOM! Studios webstore. Digital copies can be purchased from content providers, including comiXology, iBooks, Google Play, and the BOOM! Studios app.

For more on RUINWORLD and other projects from BOOM! Studios, please visitwww.boom-studios.com and follow @boomstudios on Twitter. 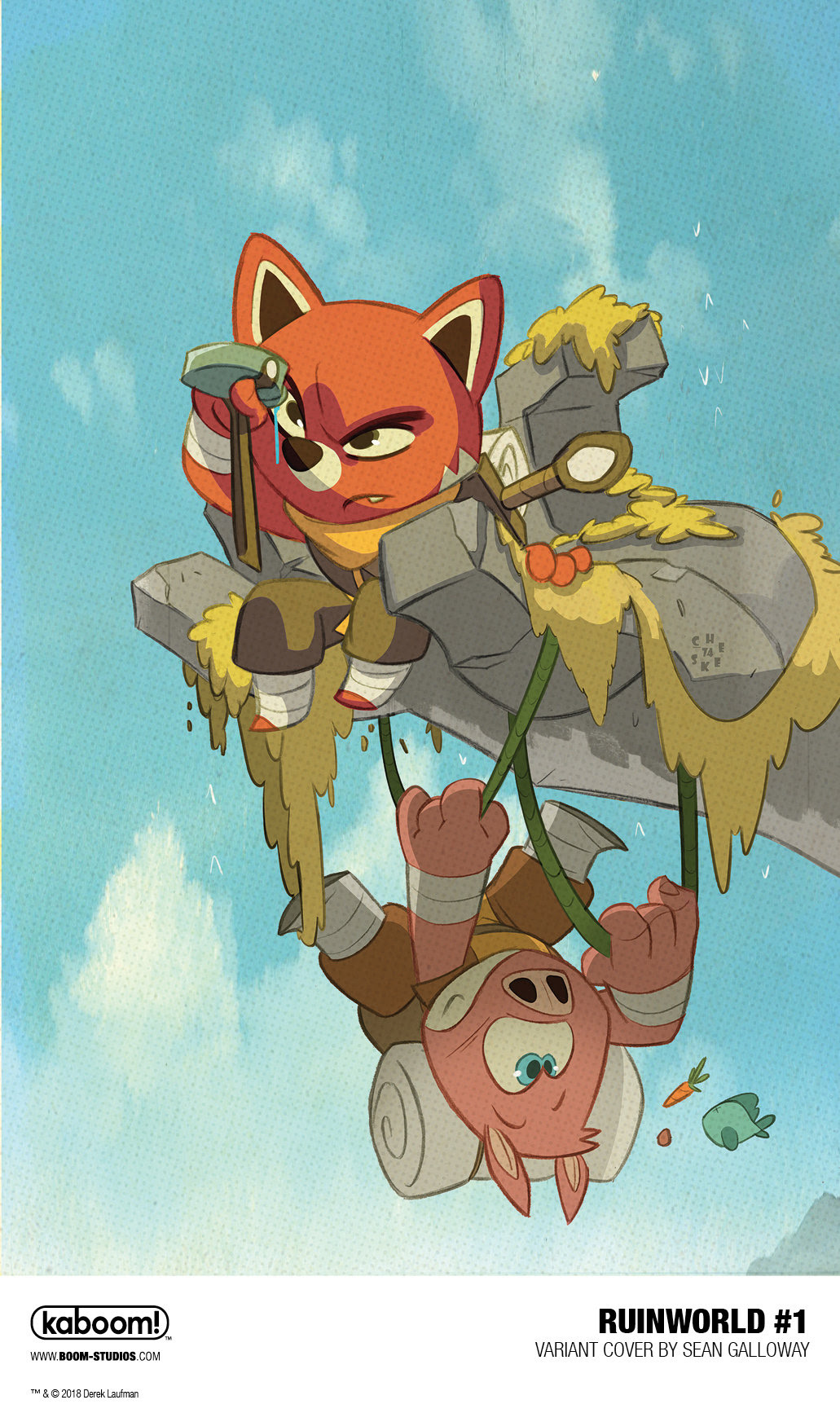 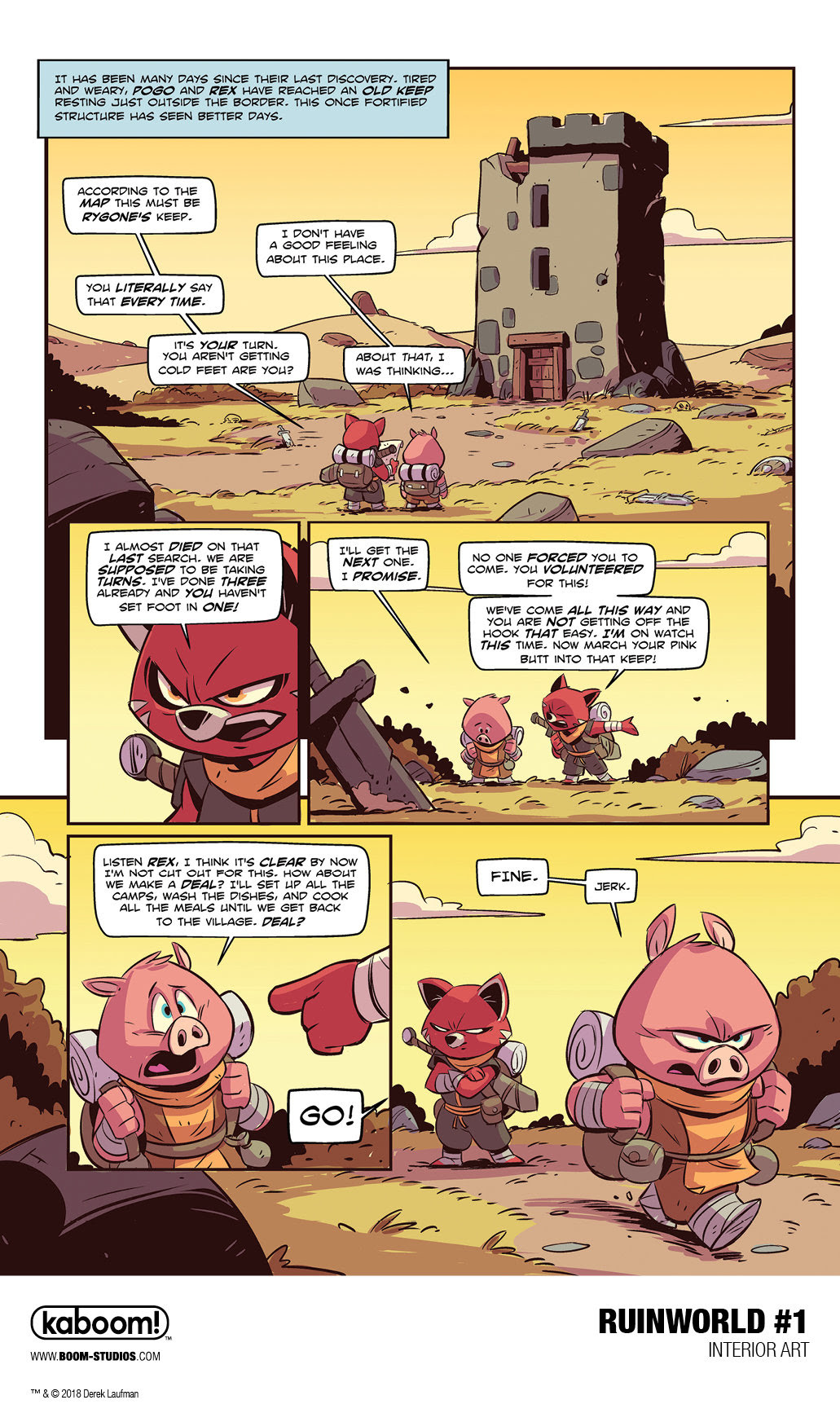 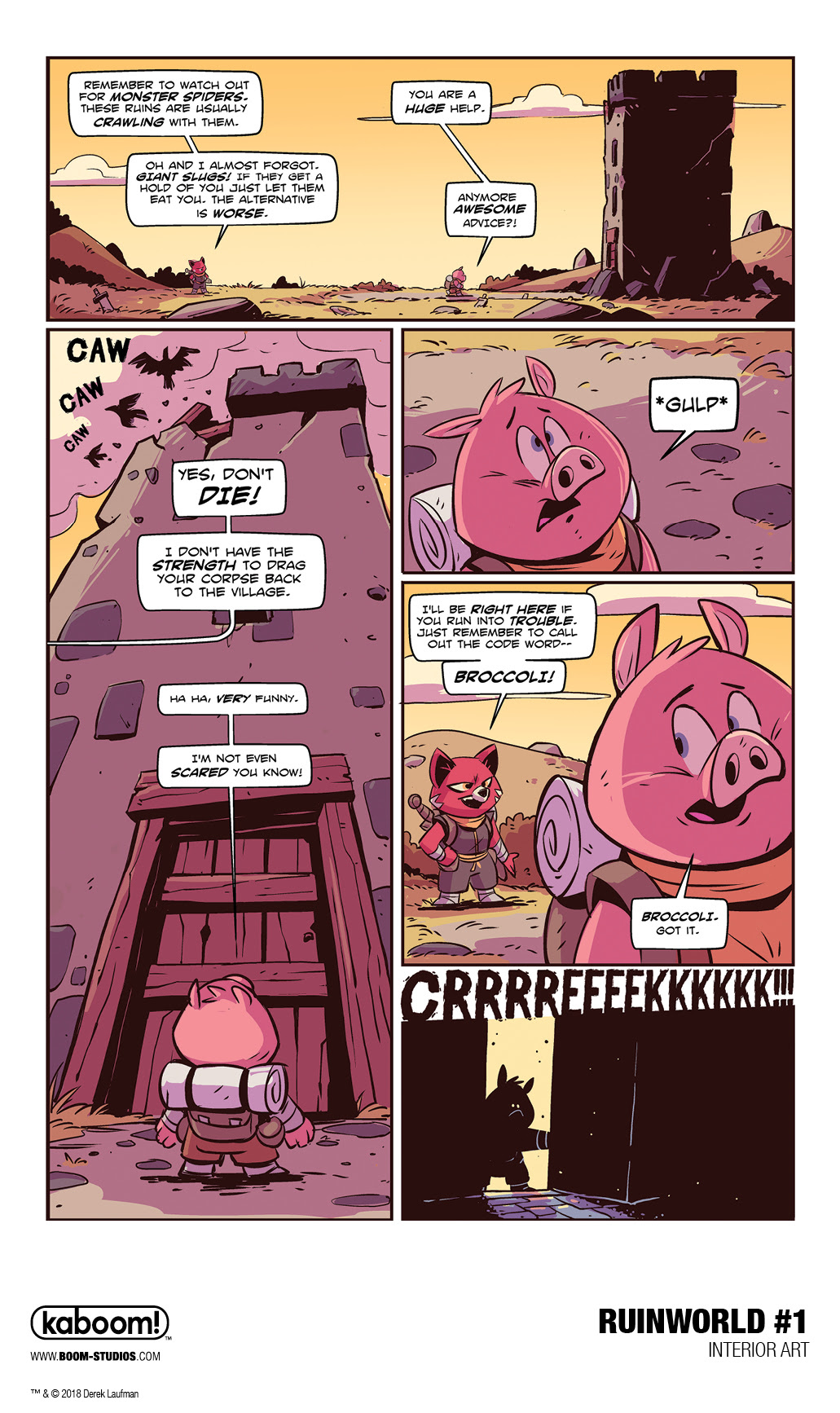 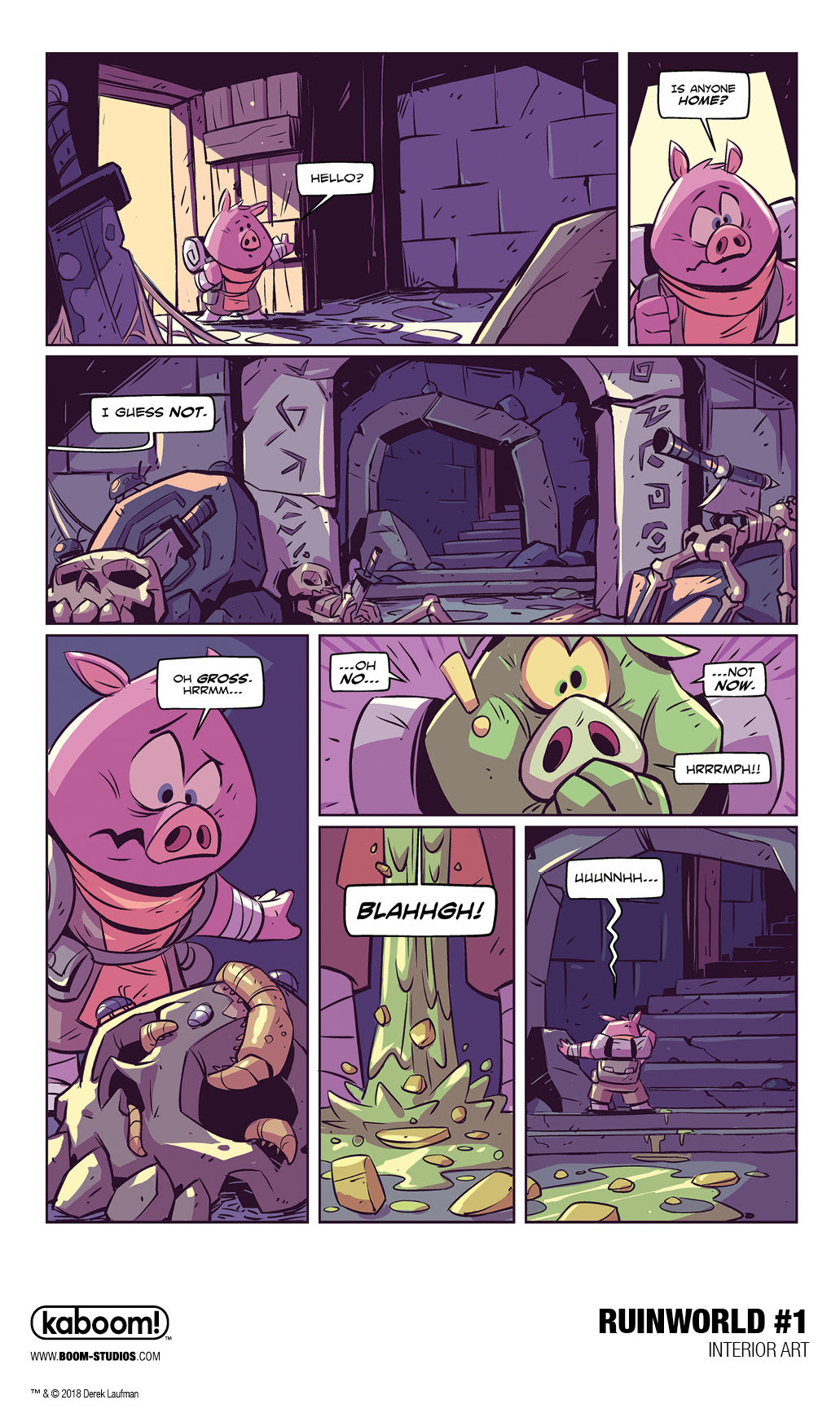