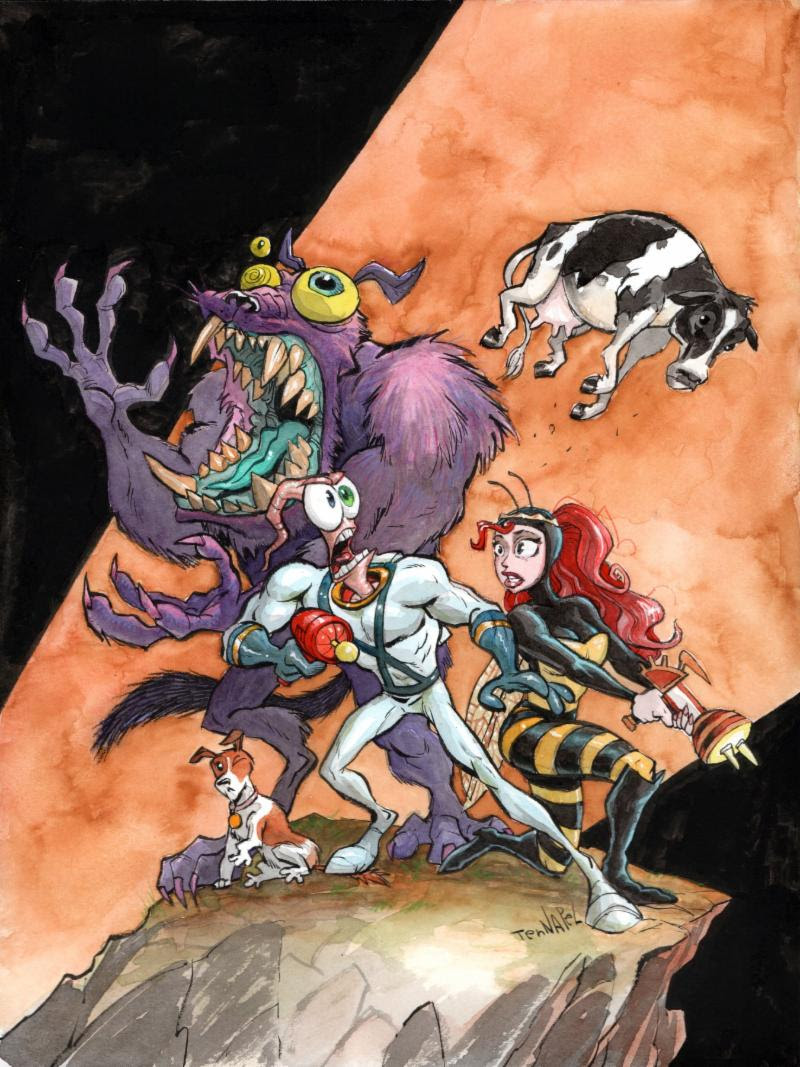 Live Simulcast Chat During First Game Design Meeting Saturday, May 4 at Noon PT on Facebook Live, Twitch TV and YouTube Live
IRVINE, CA, May 1, 2019 – In celebration of the 25th anniversary of Earthworm Jim, Intellivision Entertainment is proud to announce it has gathered together and reunited the original Earthworm Jim team to create a brand new video game adventure exclusively for the upcoming Intellivision Amico home video game console. Ten of the original programmers, artists, audio team and level designers are taking part in bringing back the uniqueness and humor of the Earthworm Jim series.
To celebrate the reunion with the fans, a 20 minute live interactive simulcast streaming event will take place on Saturday, May 4th at noon pacific during the first Earthworm Jim design meeting with the original team. As part of the live simulcast, the team will engage with fans to hear their new vision firsthand, multiple original art pieces will be hand-drawn by the artists, signed by the entire team and given away to people viewing the live stream. In addition, 50 brand new posters will be signed and numbered for live chat prizes.
“We have been talking about this moment for many years, it’s a dream come true to finally get the entire team back together. We’re looking forward to sharing a small part of our reunion and initial design meeting with fans from around the world,” said Tommy Tallarico, Intellivision Entertainment CEO/President and original Earthworm Jim 1 & 2 composer and sound designer. “Intellivision Amico is designed to bring friends and families together and we are excited for fans and those just being introduced to the series to get a first look as we kick-off the design of the game.”
Earthworm Jim is just one of the many new titles that will be coming to Intellivision Amico. Voted “GAME OF THE YEAR” in 1994, the last time the Earthworm Jim team worked together was in the follow up award-winning hit sensation Earthworm Jim 2 (released in 1995). Original team members including Doug TenNapel, David Perry, Tommy Tallarico, Nick Bruty, Mike Dietz, Tom Tanaka and Joey Kuras all went on to create their own highly successful companies, technology, video games, TV shows, comic books, albums, movies, graphic novels and world touring live events.
WATCH THE LIVE EVENT THIS SATURDAY, MAY 4, 2019, NOON PT:
Facebook: https://www.facebook.com/Intellivision/
YouTube Live: https://www.youtube.com/c/Intellivision
TwitchTV: https://www.twitch.tv/intellivisionamico/
About Intellivision Amico
Intellivision Amico, launching October 10, 2020, is a home video game console designed to bring social fun back to the living room. Amico is the Italian word for “friend” or “buddy” and Intellivision Amico encapsulates this meaning fully with a home entertainment system that has multiplayer, togetherness at its core. All new games as well as reimagined classics coming to the system invite up to eight to play using easy to use controllers and even mobile phones. Designed to appeal to a broad audience from nostalgic gamers to families, all titles will be rated E for Everyone or E10+ making it a great addition to everyone’s home. For more information, visit www.intellivisionentertainment.com.