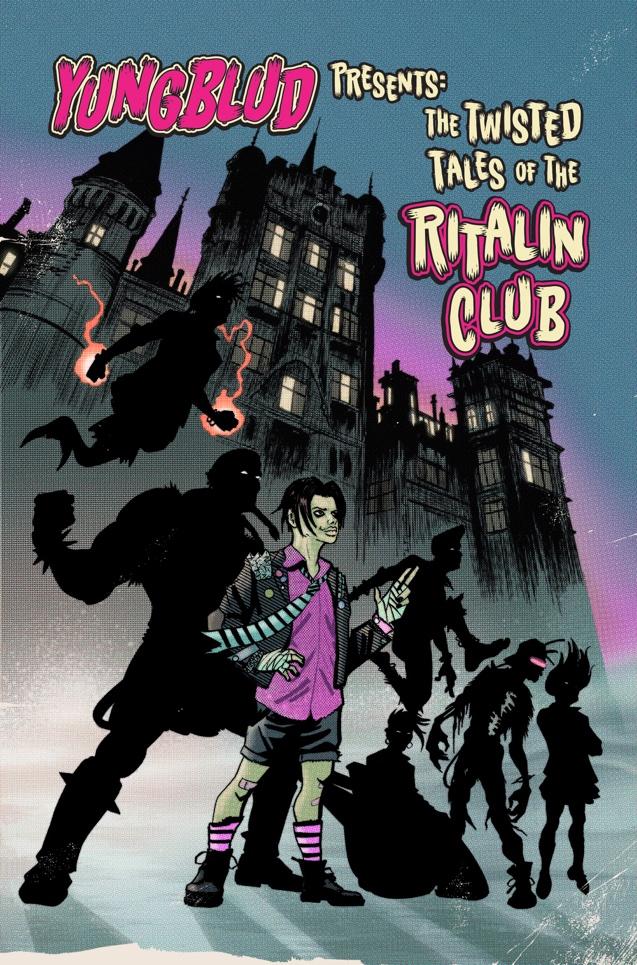 With the recent success of partnerships with BabyMetal, Andy Black, Skillet, and Grateful Dead, Z2 Comics continues to solidify their place as the premier creator of music-affiliated graphic novels. The company is pleased to announce they are working with YUNGBLUD on an original concept graphic novel, YUNGBLUD presents The Twisted Tales Of The Ritalin Club slated for release in October. The graphic novel will come with an exclusive EP of new music created by YUNGBLUD specifically for the graphic novel. The deluxe edition, limited to 1000 copies, comes autographed and contains three exclusive prints. The deluxe edition is now available for pre-order at http://z2comics.com/shop/yungblud. The standard edition is also available in the United States via Amazon at http://bit.ly/yungblud1 and in the United Kingdom at Amazon UK at http://bit.ly/yunblud2.

The story of YUNGBLUD Presents The Twisted Tales Of The Ritalin Club was created by YUNGBLUD and Ryan O’Sullivan (Turncoat, Eisenhorn, Warhammer 40,000: Dawn of War, The Evil Within, Void Trip) and follows pupils attending Blackheart’s Boarding School. All students must be punctual, masked, and heavily medicated. The displaying of superpowers is strictly forbidden. Any pupils encountering Yungblud or any member of his so-called “Ritalin Club” are to seek a teacher immediately. Failure to comply with any of the above rules will result in execution. The graphic novel will be drawn and inked by a collection of some of the brightest talents in the comic world today.

Born in Yorkshire, England, multi-instrumentalist Yungblud (Dominic Harrison) plays guitar, bass, piano, and drums. He first picked up a guitar at age two and began writing his own songs when he was only 10. At an early age, Yungblud moved to London to kick-start his career. In 2018, he released his debut album, 21st Century Liability on Locomotion/Geffen Records and later that summer played several festivals such as Reading & Leeds, Lollapalooza, Austin City Limits and the final Vans Warped Tour. He kicked off 2019 with the release of his new single, “Loner,” which NME praised as “one of his biggest anthems ever.” Yungblud & Halsey feat. Travis Barker – 11 Minutes followed in February and has amassed over 83 million combined plays on Spotify and YouTube alone. Yungblud, who is currently out on a North American headline tour, will also perform at Firefly Music Festival, the Ottawa Blues Festival and Forecastle.

About Z2 Comics: Z2 Comics have made a name for themselves releasing quality graphic novels in to the marketplace since 2012. In 2016, Z2 began collaborating with musicians to create graphic novels centered on unique stories and exclusive music. That ideal led them to work with the likes of Dan Auerbach (The Black Keys), DJ Paul Oakenfold, jazz trumpeter Dave Chisholm and others. 2018 marked another landmark year as Z2 partnered with Japanese metal band BABYMETAL on Apocrypha: The Legend Of BabyMetal, which is one of the biggest selling graphic novels Z2 has released. With the release of Andy Biersack’s The Ghost Of Ohio in 2019 alongside the recently announced Skillet Eden and Grateful Dead Origins, Z2 Comics continues to push the envelope with their music and comics integrations. Other exciting partnerships will be announced in the near future.