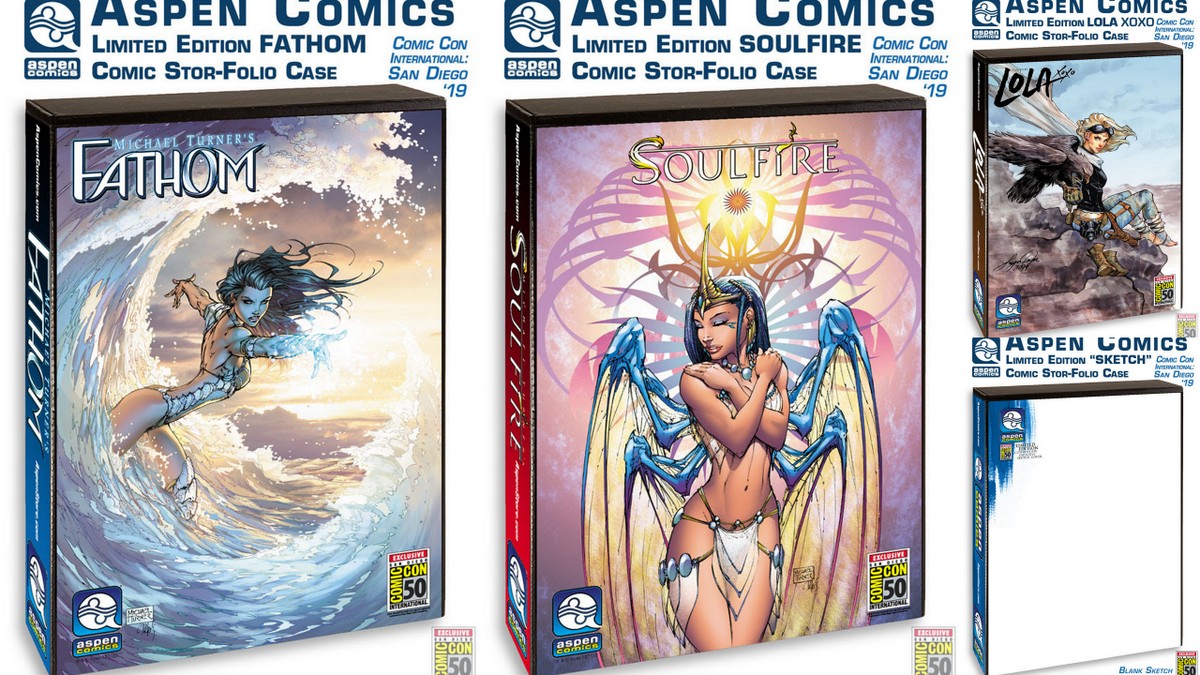 Aspen Comics has released their full line-up of comic book creators appearing at their Comic-Con International: San Diego 2019 booth #2320, including the release of a new Aspen SDCC 2019 Sketch Edition of their best-selling Stor-Folio line of comic book cases.

Aspen Comics Crew Members Frank Mastromauro, Peter Steigerwald, Vince Hernandez, Gabe Carrasco, Mark Roslan and Megan Shirk will be appearing at the Aspen Comics Booth #2320 each day of the convention, and editors Carrasco and Hernandez will be offering portfolio reviews on both Friday and Saturday in Room 206b.

The Official Aspen Comics Panel 2019 will feature all of the aforementioned talents and will take place on Saturday from 12-1pm in Room 4. All panel attendees will receive a free Aspen Comics Mini-Print by Michael Turner and Peter Steigerwald, limited to 200 editions.

Aspen VP/Editor-in-Chief Vince Hernandez will be moderating The Comic Book Editorial Panel 2019 on Friday in Room 9 from 5-6, that will also include Aspen managing editor Gabe Carrasco among many other industry editors from other top industry publishers.

Superstar cosplayer Ani-Mia will be returning for her annual SDCC Aspen Comics cosplay meet-and-greet appearances at the Aspen Comics Booth each day from 12:00 to 2:00 pm on Thursday, Friday and Saturday.

Aspen Comics is an entertainment publishing company founded in 2003 by superstar comic book artist, Michael Turner. In addition to producing their own line of hit titles including Fathom, Soulfire, Executive Assistant: Iris,Lola XOXO and more, Aspen has joined forces with some of the industry’s most notable companies on their best-selling titles. Aspen’s collaborated with Marvel, DC Comics, NBC, Gale Anne Hurd’s Valhalla Entertainment, Axe Body Spray, American Express and more. In 2018, Aspen Comics is celebrating their fifteen-year anniversary and has joined forces with powerhouse entertainment moguls David Maisel and Scooter Braun in collaboration with their founding of Mythos Studios, currently developing Michael Turner’s Fathom and Soulfire for film and other multimedia projects.