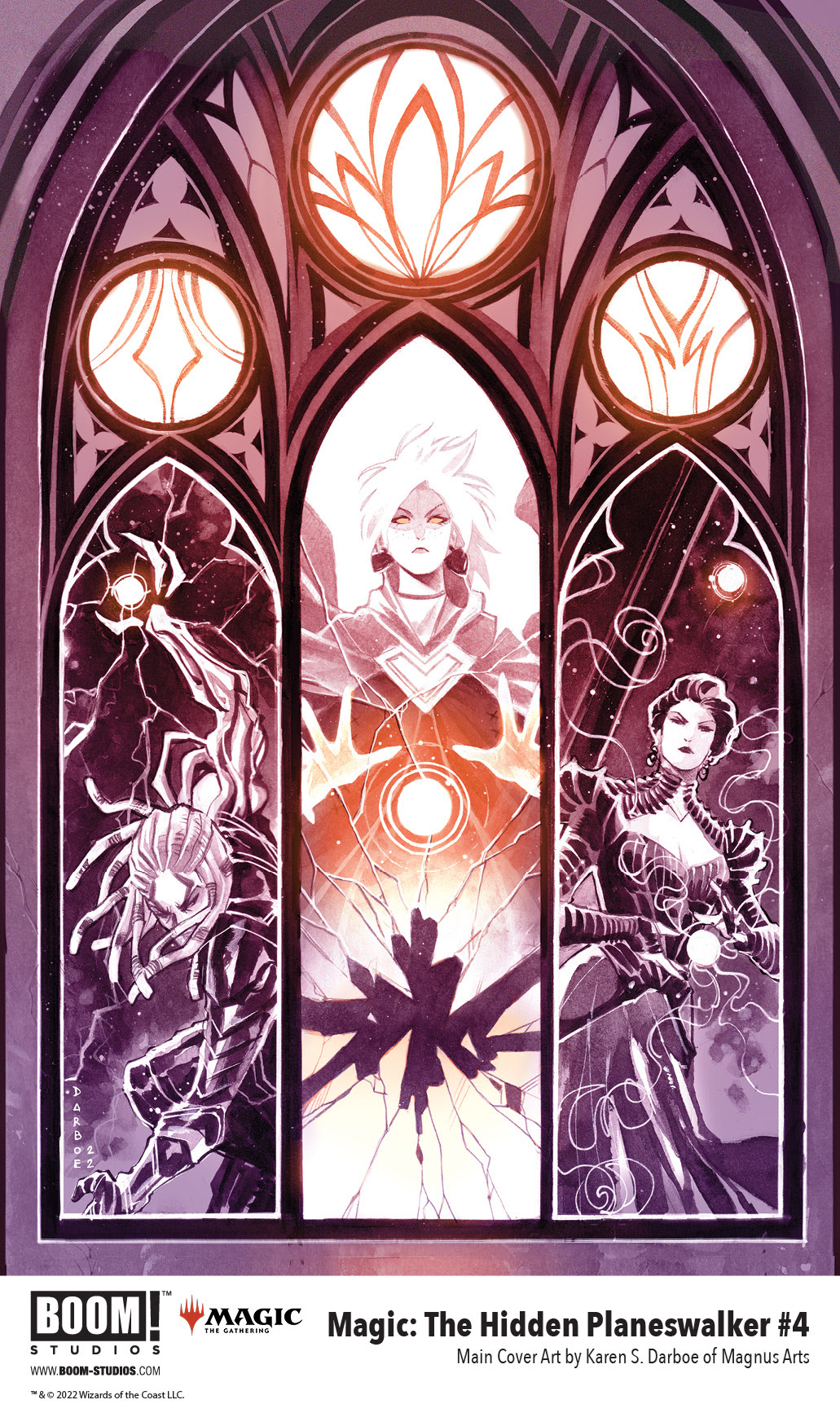 BOOM! Studios, under license by Hasbro, Inc. (NASDAQ: HAS) and in partnership with Wizards of the Coast LLC, a first look at MAGIC: THE HIDDEN PLANESWALKER #4, the latest issue in the four-issue comic book series from comic book and screenwriter Mairghread Scott (Transformers, Guardians of the Galaxy), artists Fabiana Mascolo (Firefly: Brand New ‘Verse) and Jacques Salomon (Magic: Master of Metal), colorist Francesco Segala (All-New Firefly) with Gloria Martinelli, and letterer Ed Dukeshire, about the deadly Liliana Vess and the hidden planeswalker she discovers who will change the fate of the entire multiverse forever, available in July 2022.

In the stunning climax, Isona Maive, the recently released Hidden Planeswalker, plans a reckless mission in the most dangerous corner of the multiverse—hoping to save her home plane, even if it imperils the rest of the multiverse. With Liliana’s pupil at the mercy of Tezzeret’s poisonous and misleading whispers, will Liliana have the strength to be a hero, even if it makes her feel like a villain?

MAGIC is the newest release from BOOM! Studios’ eponymous imprint, home to critically acclaimed original series, including BRZRKR by Keanu Reeves, Matt Kindt, and Ron Garney; Proctor Valley Road by Grant Morrison, Alex Child, and Naomi Franquiz; We Only Find Them When They’re Dead by Al Ewing and Simone Di Meo; Seven Secrets by Tom Taylor and Daniele Di Nicuolo; Something is Killing the Children by James Tynion IV and Werther Dell’Edera; Once & Future by Kieron Gillen and Dan Mora; The Many Deaths of Laila Starr by Ram V and Filipe Andrade; Eve by Victor LaValle and Jo Mi-Gyeong; Grim by Stephanie Phillips and Flaviano; and Alice Ever After by Dan Panosian and Giorgio Spalletta. The imprint also publishes popular licensed properties, including Dune: House Atreides from Brian Herbert, Kevin J. Anderson, and Dev Pramanik; Mighty Morphin and Power Rangers from Ryan Parrott, Marco Renna, and Francesco Mortarino; and Magic from Jed McKay and Ig Guara.

Print copies of MAGIC: THE HIDDEN PLANESWALKER #4 will be available for sale on July 27, 2022 exclusively at local comic book shops (use comicshoplocator.com to find the nearest one) or at the BOOM! Studios webstore. Digital copies can be purchased from content providers, including comiXology, iBooks, Google Play, and Kindle.

For continuing news on MAGIC and more from BOOM! Studios, stay tuned to boom-studios.com and follow @boomstudios on Twitter. 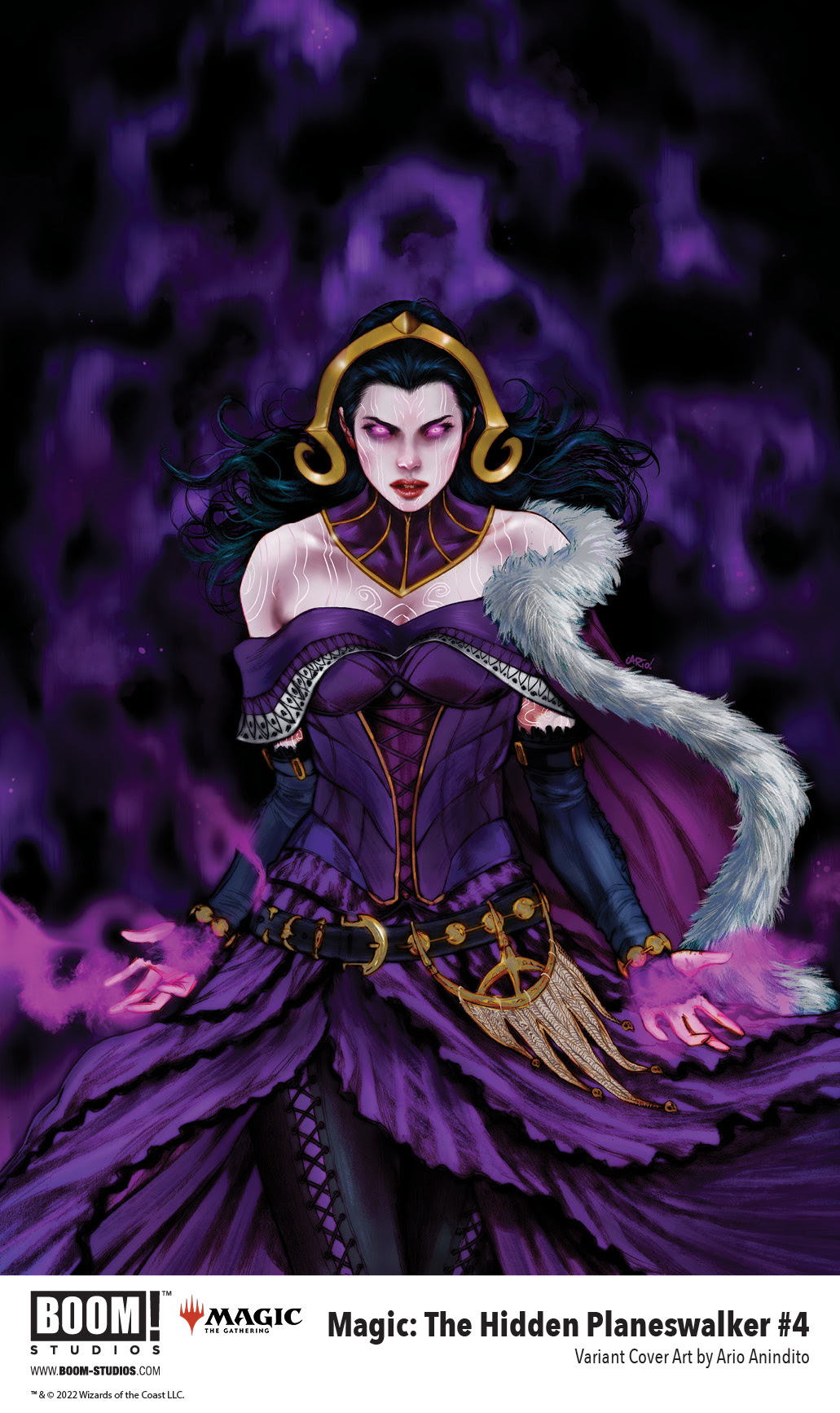 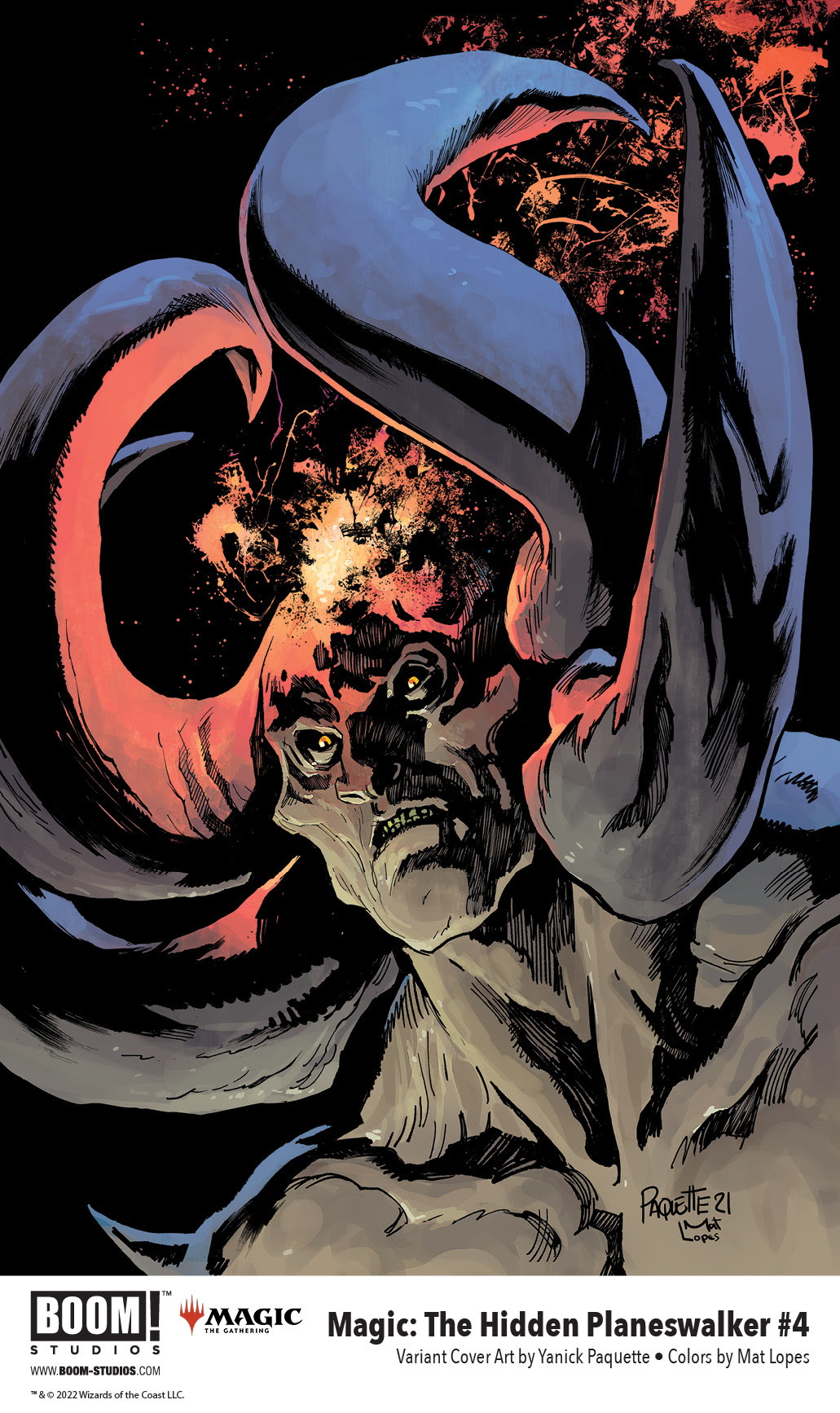 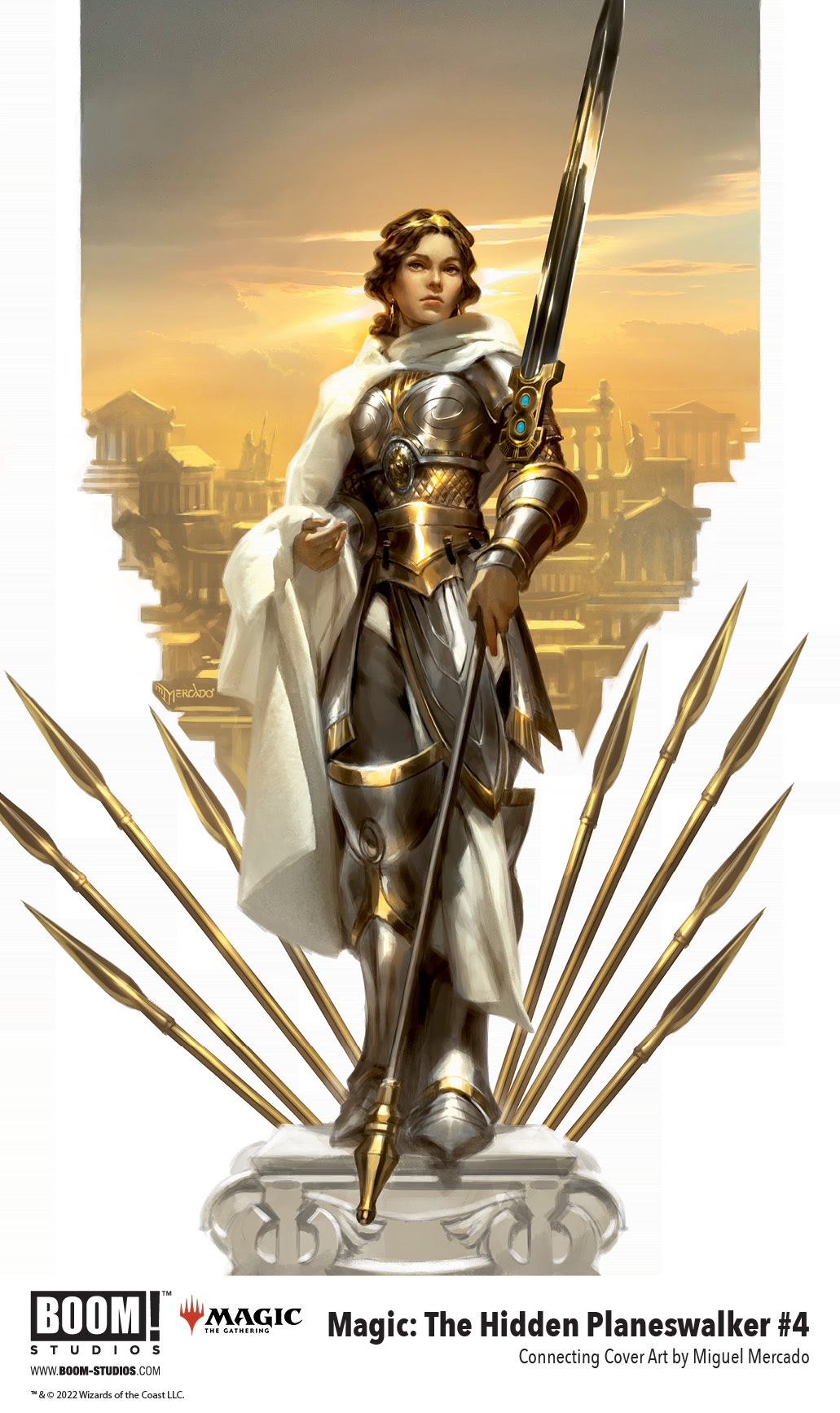 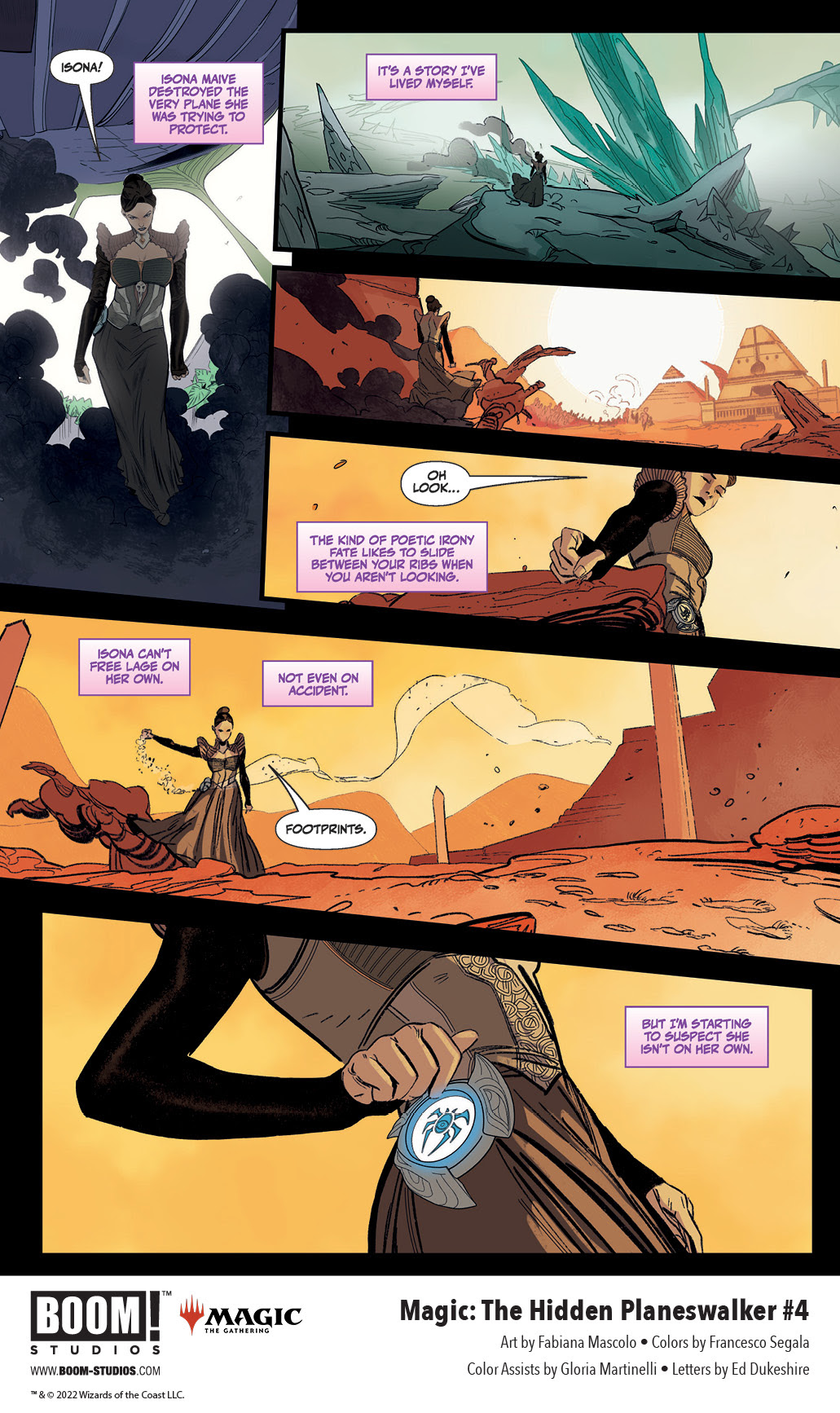 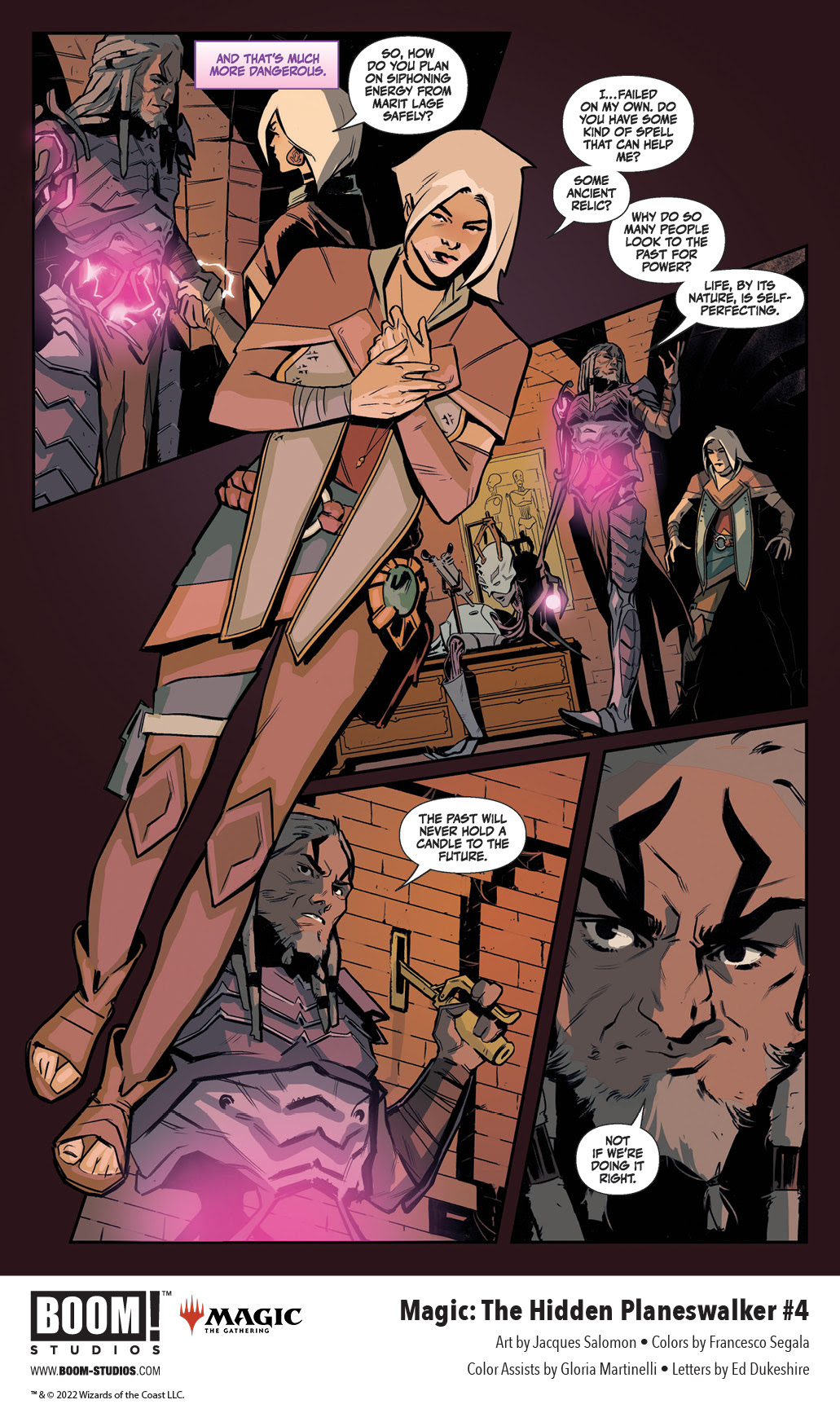 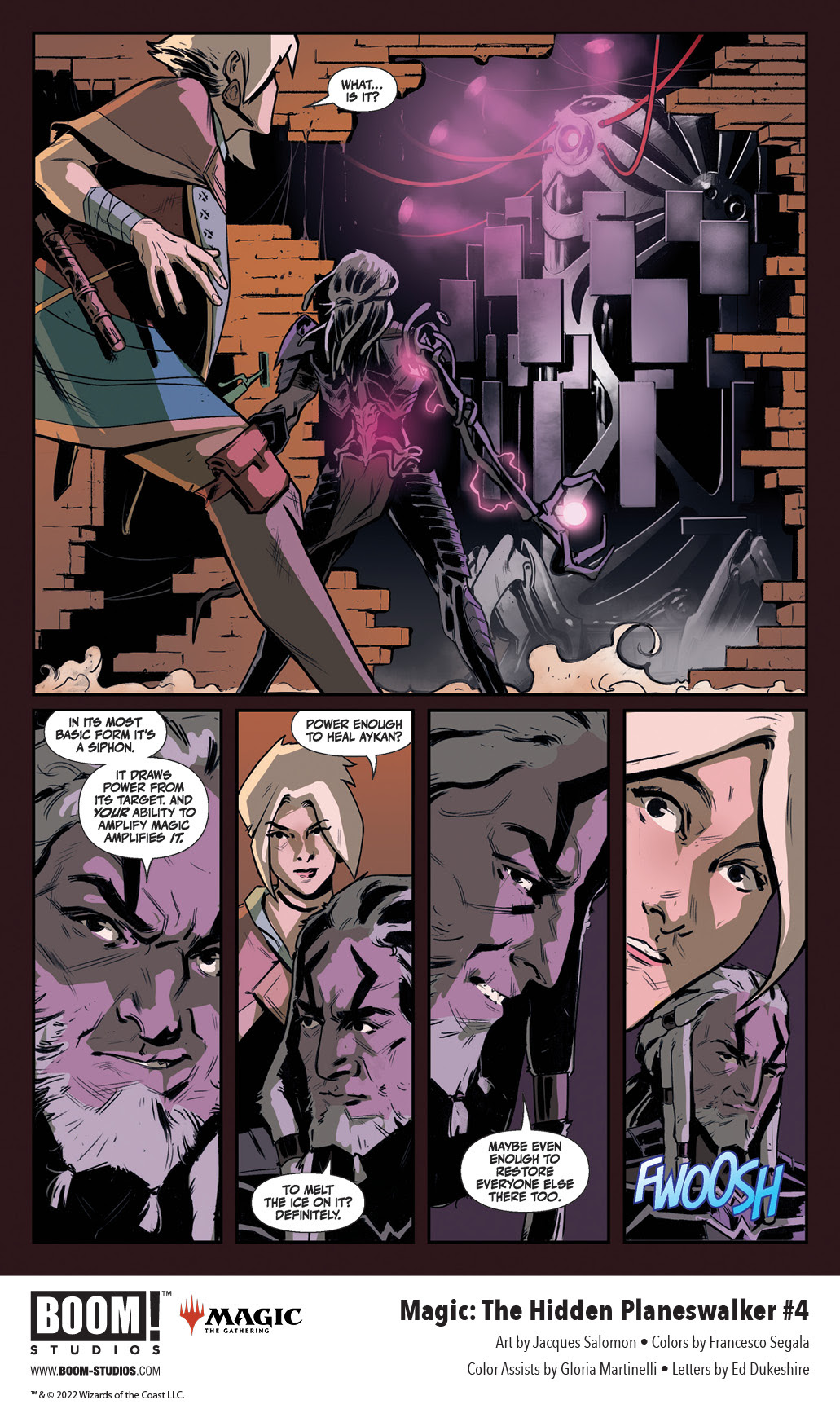 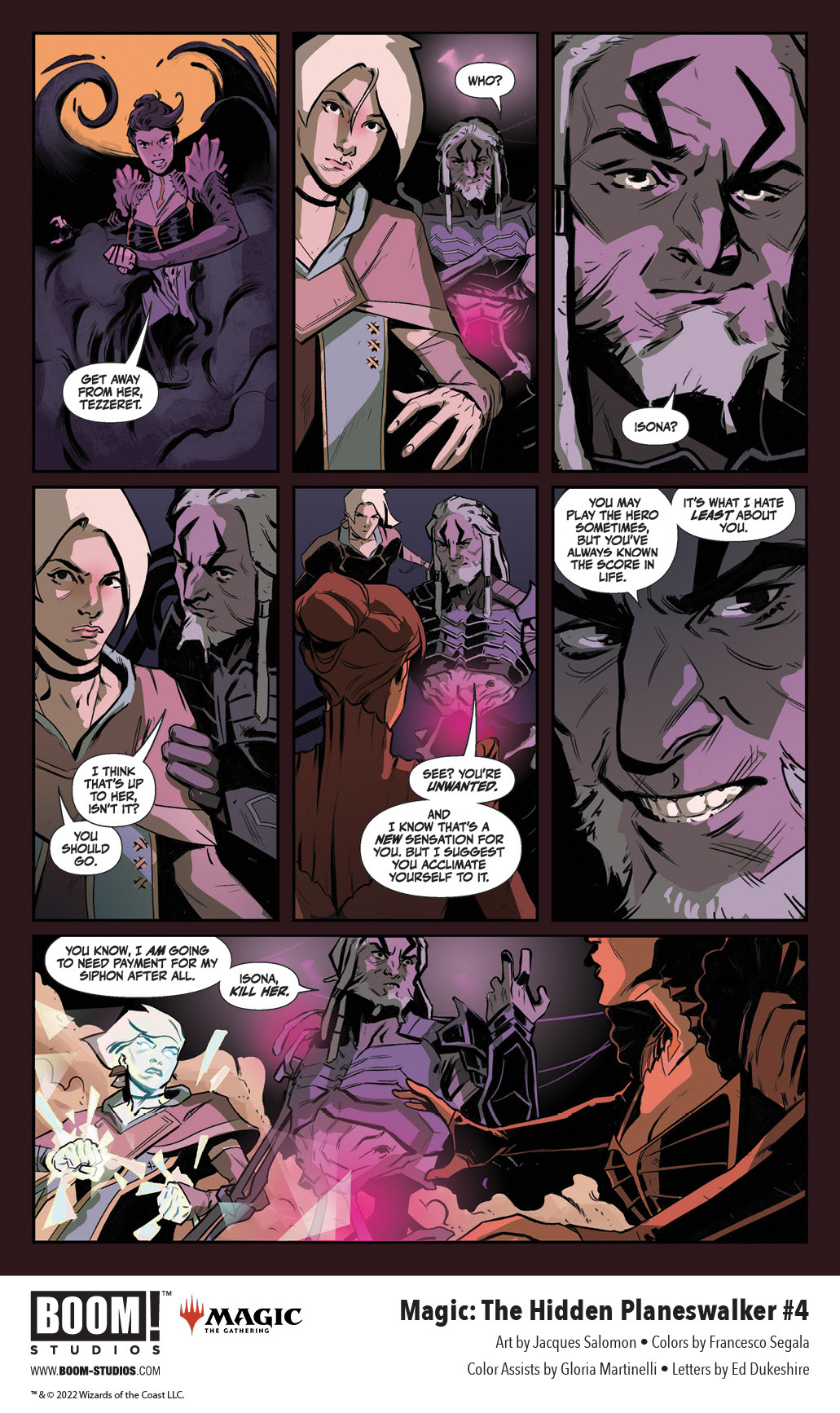 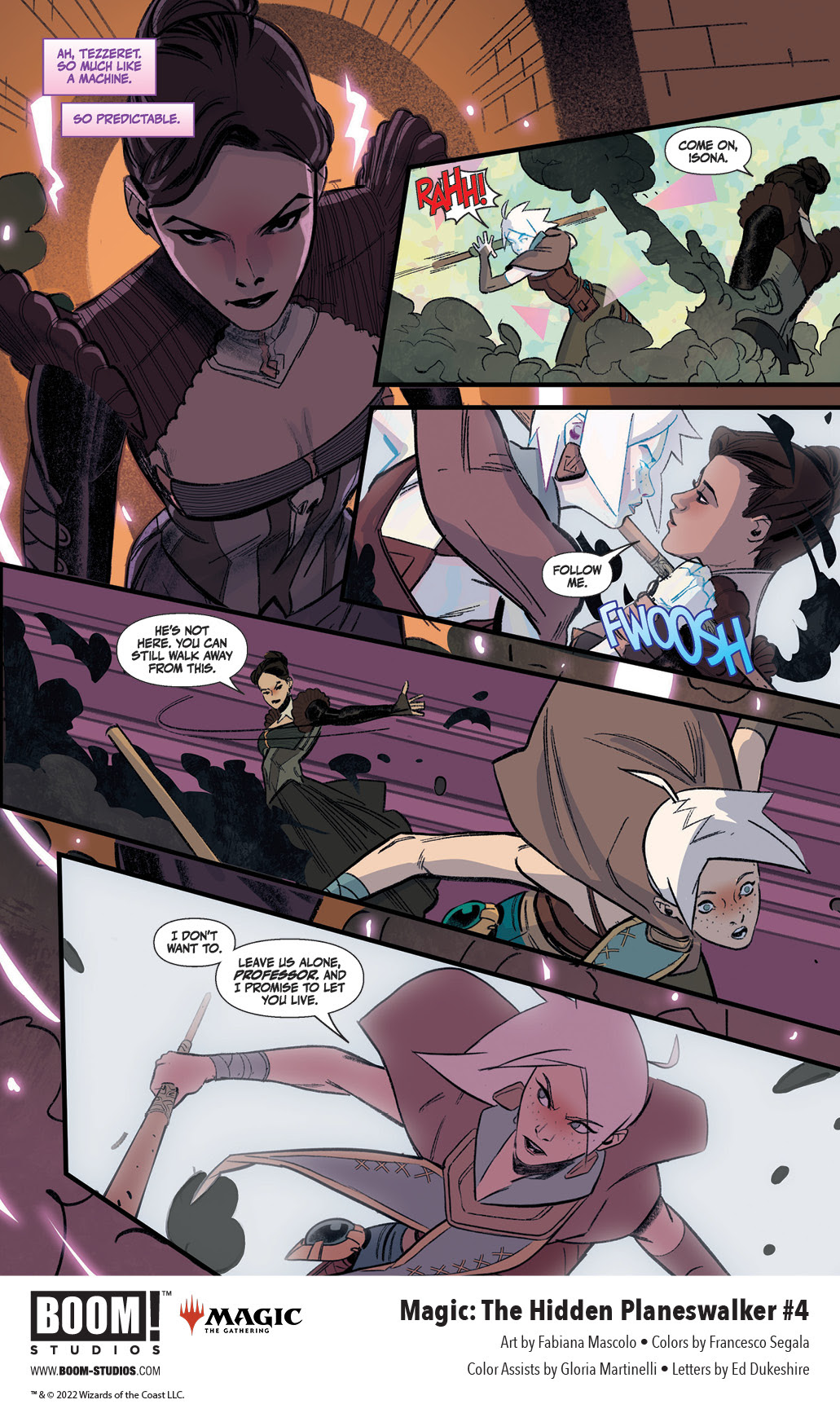 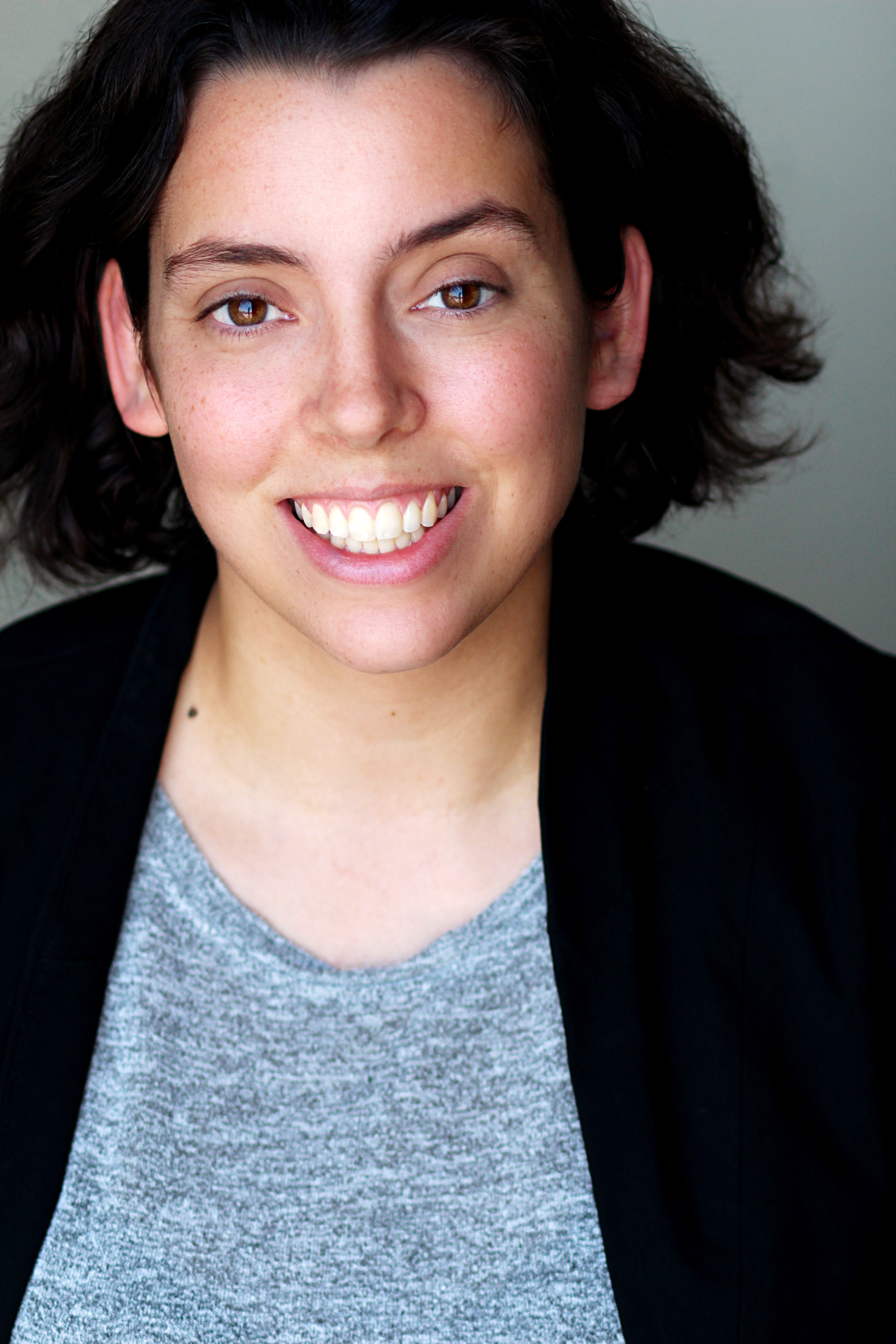 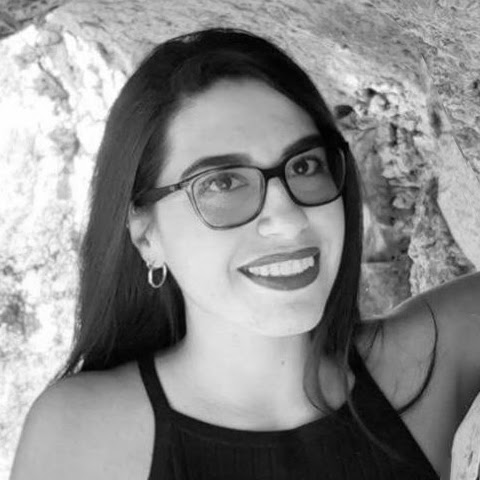