Fortnite, a game created by Epic Games, recently had an event that took the world by storm, ending Season X (10) and starting us onto a new journey.

Fortnite is a game best known for it’s Battle Royal game mode, where 100 players enter an island to a fight to the death, with the last man standing being the victor.

To give a bit of backstory for the event, there are seven characters trying to stop the Zero Point, a large, floating white orb that can lower gravity around it. There is also a meteor in the sky, frozen in time, which one of the seven characters somehow escaped from.

The character, called The Visitor, started constructing a rocket. It launched (after an excruciating 2 week wait), going high into the sky, and causing a rift in the atmosphere to be created. A few moments later, it came out of another one, flying past the players spectating.

The rocket then went through another rift, came out of a different one, and repeated this process for a few minutes. However, as it was doing this, more rockets began to appear. They all congregated in front of the meteor’s trajectory, causing the same rift that appeared in the sky to appear here, however this time much larger.

As over 50 rockets pummeled themselves into this rift, the meteor suddenly became unfrozen in time, and launched itself forward. After a few moments of silence, the rift opened above the orb, and a rocket flew out of it, shooting itself towards the orb. As it collided with the low gravity area around the orb, it sent out a large shockwave sending players flying high into the sky, far away from the map.

As the players looked on, they saw the meteor fall out of the rift, as well as six rockets who flew away. The meteor pushed in on the low gravity area of the orb as if it were trying to poke into a balloon. It smashed through and shot out a large shockwave sending all the players back, even higher than before, then started to implode on itself. It created a giant, whirling cyclone sucking everything in including the players, the bus you ride when you start the match, and most importantly, tomatoes.

As the light distorted around each player, the screen turned to black, with a bit of blue light remaining, similar to turning off an old TV. After about 10 seconds, music started to play, which was quickly slowed down and shut off as a black hole appeared.

This leaves us where we are now (or rather, where I am now at the time of writing this). We haven’t gotten much from Epic Games aside from some numbers floating around in the void next to the black hole. The Season 11 trailer has been leaked online which means the time draws near. And now, we’ve been looking at a video of a black hole for 25 hours, waiting for something to happen.

No one has any idea what this means, but speculation has been running rampant. Just about everyone agrees that we will be getting a new map, thanks in part to a slip-up from Apple who put out an image early on the app store which shows new characters standing a cliff overlooking a new game map. 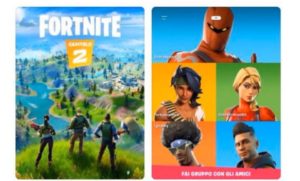