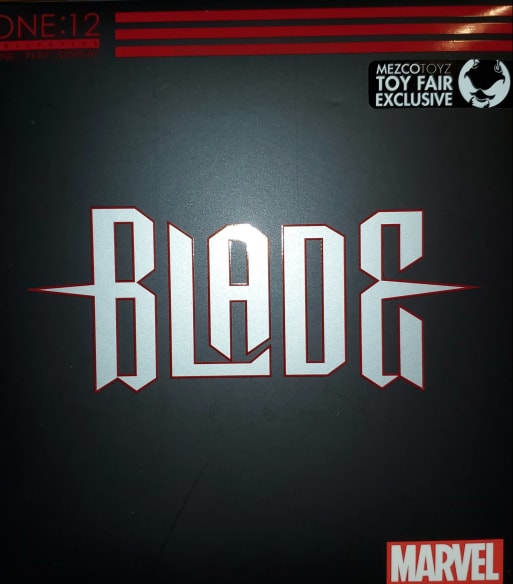 Check out the Premier Blade given as a gift at Toy Fair 2019 and hasn’t been available yet anywhere else, vampire hunter of the Marvel Universe, joins the One:12 Collective.

The One:12 Collective Blade figure features four intricately detailed head portraits: an unwelcoming scowl and a bloodcurdling roar, along with two bald version. No details were overlooked when designing the infamous daywalker. Blade comes well-equipped to hunt down creatures of the night with accessories including a customized submachine gun with removable magazines, a pump action shotgun, his signature swords with removable sheath, collapsible throwing blades, striking stakes, and of course, sunglasses. with both red or black lenses.

Eric Brooks was being born when a vampire attacked his mother during childbirth, passing on a series of enzymes that transformed Eric into a Dhampir – a being tainted by a vampire’s kiss, but not converted. Now infused with all of a vampire’s powers but few of their weaknesses and determined to avenge his mother’s death, Eric Brooks arms himself with weapons that are fatal to the undead and fashioned himself into the vampire hunter known as Blade.