UNIVERSAL CITY, Calif., April 2, 2019 /PRNewswire/ — Family is worth fighting for in the inspiring underdog story, Fighting With My Family, arriving on Digital April 30, 2019 and on Blu-ray, DVD and On Demand May 14, 2019 from Metro Goldwyn Mayer Pictures (MGM) and Universal Pictures Home Entertainment. Set in the competitive world of wrestling, Fighting With My Family is “a wonderful film about finding strength through family and believing in yourself” (Erik Davis, Fandango), brought to life with an electric performance from Florence Pugh (Lady Macbeth), and supported by hilarious and heartfelt performances from Lena Headey (“Game of Thrones”), Jack Lowden (Mary Queen of Scots), Nick Frost (Shaun of the Dead), Vince Vaughn (Swingers), and Dwayne Johnson (Fast and Furious franchise), who also produced the film. 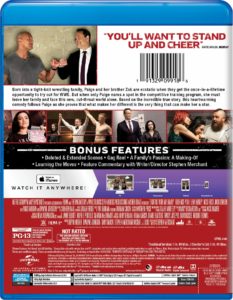 Written and directed by Emmy Award® winner Stephen Merchant (“The Office”), Fighting With My Family is a heartwarming comedy based on the incredible true story of WWE Superstar Paige™ (Pugh). Born into a tight-knit wrestling family, Paige and her brother Zak (Lowden) are ecstatic when they get the once-in-a-lifetime opportunity to try out for WWE. But when only Paige earns a spot in the competitive training program, she must leave her family and face this new, cut-throat world alone. Paige’s journey pushes her to dig deep, fight for her family, and ultimately prove to the world that what makes her different is the very thing that can make her a star.

A “genuinely inspiring” (Nick Allen, RogerEbert.com) film that will make audiences gleam, Fighting With My Family Director’s Cut, on Blu-ray™ and DVD comes with action-packed bonus features that invite viewers into the world of wrestling and take a deeper dive into Paige’s real larger-than-life family. The Blu-ray combo pack also includes a Director’s Cut filled with new and extended scenes not seen in theaters.

Seven Bucks Productions’ Dwayne Johnson and Dany Garcia served as producers on the film with Hiram Garcia serving as executive producer. Kevin Misher of Misher Films produced alongside WWE Studios and Michael Luisi in association with The Ink Factory. Other executive producers are Daniel Battsek, Tracey Josephs and David Kosse for Film4, Rhodri Thomas (The Ink Factory) and Andy Berman (Misher Films). Film4, who developed the project from its inception, co-financed the film with The Ink Factory.

BONUS FEATURES on BLU-RAYTM AND DVD